How clued up are you about one of the oldest horse breeds in the world? 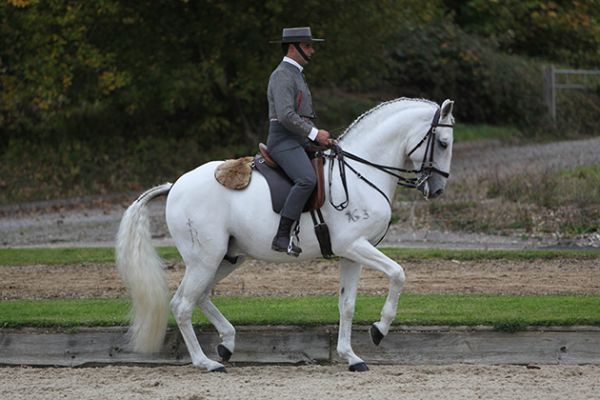 At next week's Olympia Horse Show (13-19 December) the elegant Portuguese Lusitanos will be in action demonstrating their power and athleticism. Get yourself up to speed on the breed with these fast facts

1. As the indigenous Iberian horse from Portugal, the Lusitano is thought to be one of the oldest breeds of horse in the world. The breed’s existence can be traced back to 1700BC, shown by cave paintings in the Escoural Caves in Alentejo.

2. They tend to be of a lighter, more workmanlike build than Spanish breeds such as the Andalusian, reflecting the fact that the Portuguese Lusitano was traditionally bred for bullfighting and equitation, rather than parade.

3. A piece of fur called a Xairel is worn behind traditional Portuguese saddles, covering the horse’s loins, the original purpose of which was to prevent the tils of the rider’s jacket coming into contact with the horse’s coat, and becoming dirty.

4. It is common for children in Portugal to learn to ride on Lusitanos — many riding schools don’t have ponies. “They are spirited but sane,” says Sherene Rahmatallah of Sussex Lusitanos. “They would never buck or try to get a rider off.”

5. Lusitanos tend to mature late — a horse wouldn’t be expected to reach the peak of its training until the age of 12, and many continue to work to a high standard well into their 20s.

6. Lusitanos are still used to manage cattle on huge estates in Portugal, and were primarily bred for their canter — very little trotting is required when out working on the land. The talent for the canter, and collected work, has translated into the dressage arena, where many Lusitanos excel.

7. The first Lusitano to win an Olympic medal was Guizo, ridden to team silver in Athens by Spain’s Juan Antonio Jimenez Cobo. In London 2012, Rubi became the first Lusitano to qualify for the Olympic kür, delighting the crowds with rider Gonçalo Carvalho. More recently, all four members of the Brazilian dressage team at the 2016 Rio Olympics rode Lusitanos.