The Pride of Portugal comes to Olympia 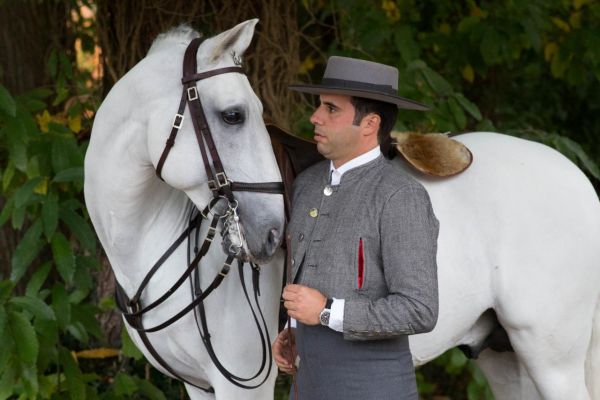 The displays at Olympia never fail to marvel and inspire visitors at the show. This year there will be an “Iberian feel” with the globally-renowned Equestrian artist Santi Serra and a demonstration of some of the best Lusitano horses Portugal has to offer.

For each performance at the show Spanish horseman Santi Serra will display his unique relationship with animals, communicating with them through mind and body in an impressive choreography using horses and dogs. Following on from this a world-class team of Lusitano horses and Portuguese riders will display traditional Portuguese equitation choreographed to music.

As The Gaitpost’s roving reporter I was lucky enough to be given the opportunity to “have a go” at this more classical style of riding under the watchful eyes of two of Portugal’s leading Equitation riders. Prior to hopping on board I watched these riders train both younger and more established Lusitanos. One can only be in awe of their natural ease and ability on horseback. They displayed perfect Piaffe’s and Passage one handed, yet it seemed as they hardly lifted a finger.

Lusitano’s vary in height, colour and the amount of bone but they clearly have plenty of blood and a noble outlook- carrying their heads high with a “ready for action” expression. They are renowned for their agility and courageousness but also their intelligence and loyalty to their riders. It is explained to me that it is in their blood to build strong bonds with their riders and will follow you out of the stable like a faithful dog as we witness some minutes later.

Yet beneath the quiet stable manner these are highly sensitive animals. This I found out when I was introduced to Ziggy, my Lusitano mount for the lesson. He looked placid and gentle on the ground but once on board, I knew I was in for a fun ride. He was so attuned to the aids, responding to the lightest touch of leg and hand and even a marginal shift in the seat. It was magical to ride- the real essence of classical riding. Inspired, I went home to practice what I had learned on my young thoroughbred. Needless to say, she was less convinced about the one handed bit.

Overall, it struck me that this style of riding and training horses is an intelligent, thoughtful style of equitation rather than forceful, disciplinarian style. The results are achieved seemingly without effort through co-operation not coercion. These horses are kind, loving and gentle of nature to handle in the stable but offer presence and spirit to ride. If you want to understand what “responsive to aids” really means- try riding a Lusitano.

The Lusitano horse is the pride of Portugal and remains a status symbol for wealthy families. In fact most families who possess a large estate have at least one Lusitano not just for status, also for functionality. They play a vital role as a working animal to round up livestock on farms and estates and many are bred for this purpose. You can expect to see most Portuguese riders riding one handed, even accomplishing the most complicated dressage movement. The other hand holds their “Vara”- or cattle prod and in Equitation, this tool is used artistically as you can be seen at Olympia. In addition, they are widely used around the world by bull fighters owing to their courageousness and agility.

This fine breed excels in the dressage arena with several pure-breds making it to Championship level. In 2006 at the FEI World Equestrian Games in Aachen, Portuguese Dressage squad all competed on Lusitano horses as did Spanish team member, Juan Antonio Jimenez. At the same games Belgium’s Felix Brasseur drove four Lusitano’s to take the individual World Four-in-Hand Driving title, proving the versatility and talent of the breed. Their courage, natural balance and tenacity has made them attractive to sport horse breeders too. Notable event horses with Lusitano breeding include Jester’s Quest, the horse that gave Gemma Tattersall her first Badminton ride and The Tourmaline Rose, Pippa Funnell’s Hickstead Eventers Grand Prix winner.

The display team coming to Olympia is the biggest ever brought to the UK- consisting of 16 hand-picked horses, showcasing the best of the breed. They will perform an impressive musical ride under some of Portugal’s top riders, displaying their best qualities including a number of Grand Prix movements one-handed. Prepare to be dazzled by a spectacle that not only celebrates this magnanimous breed but exhibits a masterful display of horsemanship, among the many we can expect to see at Olympia this year.